About Almaty City in Kazakhstan 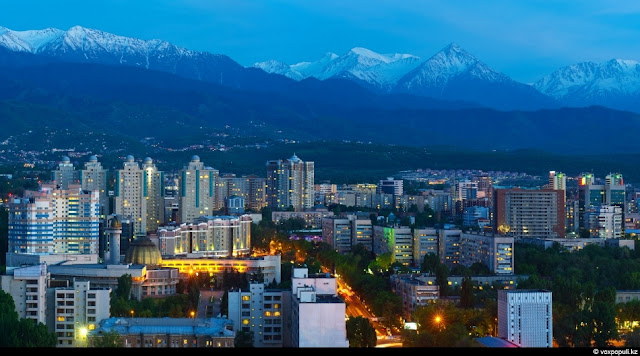 The country is influenced with Russian culture, people here speaks local Kazak language and officially prefer to speak Russian. Although Russian is well spoken language in whole of Kazakhstan including Almaty city.

In Almaty tourism has increased rapidly from India in the last few years. When you plan to travel to Almaty, former capital of Kazakhstan, you can experience wonderful mix of tradition & culture. Actually Central Asia trip is incomplete without visiting Almaty lakes and mountains located in and around city. There is Kok Tobe Mountain which is the highest point of Almaty is also a great activity area for family and kids travelling with you which includes parks and beautiful local restaurants. Kok Tobe visit is possible by a cable car ride as well as by road. Must see places in Almaty are Shymbulak also known as Chimbulak, Big Almaty Lake, Palace of President, Republic Square and Monument of Independence, and Astana Square, Panfilov Park, Abai Square and Palace of Republic, Presidential Park etc. City also having great Indian restaurants for families and groups where we can arrange vegetarian food also. Shopping in Almaty is also a great experience because Almaty has perhaps more bazaars than most cities in the country, the most popular being the Green Bazaar, Chocolate factory store & shopping malls. Tourists also enjoy shooting rifle, dust bike, river,

Tourists also enjoy nightlife of Almaty which includes casinos, night clubs, strip bars & Top Almaty Karaoke Bars, these places start operations from 10pm till 5am in the morning so it will be unforgettable experience for a group of friends.

Our team at Go Almaty DMC will plan a perfect holiday for your family and corporate groups as per commitment.

Popular posts from this blog

August 05, 2020
Almaty city is full of a rich selection of late night entertainment that is sure to please anyone around the world. Whatever you want including cocktails, dancing or music, you can find easily. Almaty tour is to explore the great nightlife city has to offer to the travelers all over the world. You can experience by walking tour to explore the attractions including night clubs, strip bars, drinks etc.  Men can enjoy the erotic secret places of Almaty. We can organize your visit to 5 strip clubs in Almaty with great hospitality experience as girls here will go to any extend to please you for extreme enjoyment in their warm arms. Options: Night clubs, Strip clubs, Party Bus, Karaoke, Bars, Limousine  Places to enjoy nightlife:- -Party bus is suitable for corporate groups want to enjoy clubbing on wheels which includes gogo girl dancers, cocktail and music for about 2hrs -Kazanova club -Office club -Babylon -Matrioshka -50 Shades of Grey
Read more

August 06, 2020
Almaty is a well planned city of Kazakhstan with clean and clear roads and broad highways. Almaty city is full of supermarkets, hypermarkets and entire trade centers, these huge shopping centers appear everywhere in Almaty city, where you can buy practically any product, equipment, clothing and accessories. Some large shopping centers have been already open, and the construction of new ones is under way. One of the largest shopping center on the territory of Almaty is the Shopping Mall MEGA, where besides food supermarket, boutiques and salons you can find some cafes, ides and movie hall. Here you can buy all international brands for our family and friends But the grandest one is the Shopping Mall MAXIMA, which is placed on the area of 35 hectares and which can be called by right the shopping mini-town. Besides food supermarket and plenty of boutiques, it has cinema, bowling, billiard room, skating rink, some restaurants, cafes and bars, children’s playground, internet café, hairdresse
Read more

August 06, 2020
Big Almaty Lake can be reached by car, bus (bus 28), mountain bike or by foot. By car it’s only 30-40 minutes, so we choose that option. The lake sits at 2500 meters above sea level in the Big Almaty Gorge. What makes this lake special is that the colour changes depending on the weather and the time of year. During our visit the lake had a deep turquoise colour, but it can also have an emerald green hue. The surrounding forest makes it even more spectacular.
Read more

August 06, 2020
Central Mosque located in downtown Almaty is built in the Timurid style of architecture and accommodates up to 7,000 worshippers. The large turquoise-blue dome visible from quite a distance beckons the faithful to prayer five times a day. As you get closer, you will begin to notice how refreshingly different the white marble mosque looks from all the grey Soviet-style architecture around the city. The 5 tall, blue-topped minarets, the calligraphy on the exterior facades, the slender archways, and the long, meandering path to the entrance flanked by grassy patches, will all captivate your senses before the richly carved stonework inside blows the remainder of your mind away.
Read more

August 06, 2020
At the heart of Panfilov Park you can visit the colourful Zenkov Cathedral, also known as Ascension Cathedral. The cathedral is one of Almaty’s few surviving tsarist-era buildings. Completely built entirely of wood, the cathedral was designed by AP Zenkov in 1904 and is still a functioning Russian Orthodox Church.
Read more

August 06, 2020
Central Gorky Park is Almaty’s biggest recreational park. There is something for everyone, as here you can go to the cinema, funfair, aqua park or sit down at one of the cafés to relax.
Read more

August 06, 2020
Located at Panfilov Park, this impressive wooden building was built in 1908, at the same time as Zenkov Cathedral. Here you can can see and hear a fine collection of traditional Kazakh instruments, such as bagpipes, wooden harps and horns, but it’s also possible to take a class to play one of these instruments.
Read more

August 04, 2020
GO ALMATY DMC – A Destination Management Company founded by leading travel professionals with years of experience in providing unsurpassed experiences in KAZAKSTHAN (ALMATY & ASTHANA) , the model for the success of GO ALMATY DMC has been that we are constantly able to exceed expectations of travelers and business partners. GO ALMATY DMC philosophy is that only a company that holds on to its entrepreneurial style since its birth in 2015 can deliver these exceptional experiences. Our team is having more than 30 years of collective experience in travel and tourism industry. This entrepreneurial empowerment extends to all levels of staff – the result being a drive to create unique and cost-effective travel products and services that are unequalled anywhere else in the world. GO ALMATY DMC and its unique way to capture travel dreams and turn them into unforgettable experiences, where product excellence and total support to our customers, is always at the forefront of our delivery.
Read more